SHAP is certainly one of the most important tools in the interpretable machine learning toolbox nowadays. It is used by a variety of actors, mentioned extensively by the research community, and in my experience it provides the best insights into a model behavior. 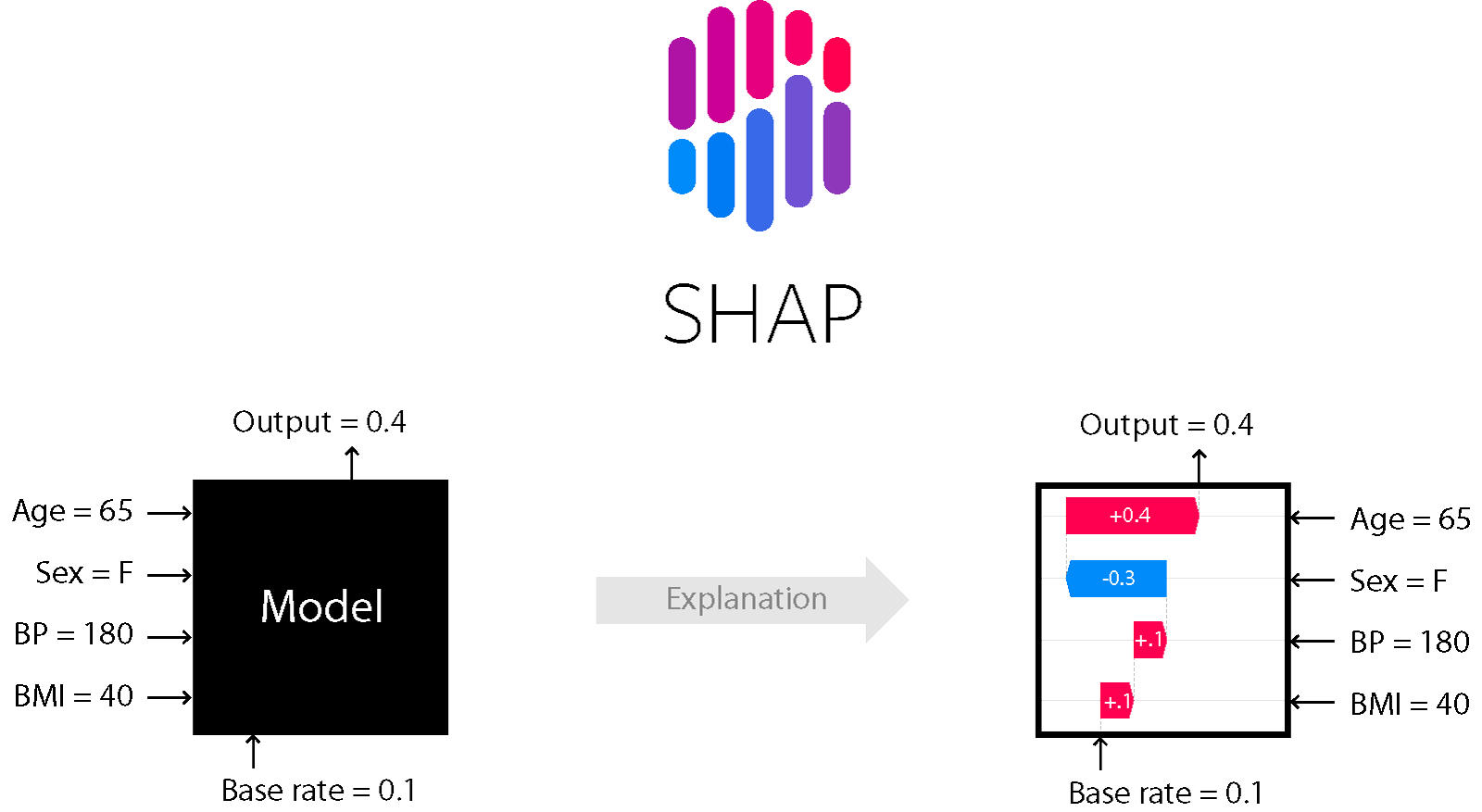 This blog article gives a detailed yet simple explanation for Kernel SHAP, the core of the SHAP reactor.

In the last blog article I've introduced the SHAP machine learning interpretation method, and presented its main underlying concept: Shapley values. We've seen that Shapley values, despite being very satisfying when used as feature weights for the means interpretation, are not practical.

The computation of Shapley values is only tractable in low-dimensional problems. This is why the SHAP paper introduces methods to compute approximate Shapley values, without having to train this huge number of models.

The most versatile such method is called Kernel SHAP and is the topic of this blog post.

SHAP or the art of tractable estimations of Shapley values¶

Several methods have been proposed to estimate Shapley values efficiently. The main problem is to estimate the models fit with subsets of features, and avoid computing terms for all possible coalitions. Some proposed methods are model-specific (to linear models, tree-based models and neural networks) and another one is generic but might be slower or provide worse estimations (Kernel SHAP).

I will only go through KernelSHAP because it is the most versatile version of SHAP. The interested reader can go through the references above.

The core idea of Kernel SHAP is the following: instead of retraining models with subsets of features, we can use the full model $f$ that is already trained, and replace "missing features" with "marginalized features" (i.e. missing features are "integrated out"), that are typically estimated with data samples. For instance with 3 features $x_1$, $x_2$, and $x_3$\, the partial models where $x_3$ is missing is estimated with the following formula:

Estimating this quantity still requires a choice for $p(x_3)$. A naive sampling choice would lead to the use of unrealistic data points and would break the desired explanations properties mentioned above.

The authors found a way to maintain those properties with the LIME method. Note that is doesn't mean that we have done all this work and ended up using plain LIME. Here LIME is used with a custom proximity function $\pi$ that is very different from LIME's:

where $D$ is a distance function (typically the cartesian distance for structured data),

where $p$ is the number of features.

These two equations are obviously very different, the first one uses the original features (masked, hence $z$ instead of $x$) and penalizes distances between sampled points and the original data point for which we seek an explanation. On the other hand, the SHAP similarity kernel only uses the number of features in the coalition $|z'|$ and it penalizes coalitions with a number of features that are far from $0$ or $p$. That is, it puts more weight on coalitions that are either using a small number of features (because it highlights the "independent" behavior of the features) or almost all of them (because it highlights the impact of features in interaction with all of the others). The theory behind this choice of the kernel is that it is the one that guarantees three desirable properties of additive feature attributions methods mentioned above (Theorem 2 of the paper).

So, as expected the biggest difference between the Kernel SHAP and the LIME sample weighting strategies is seen when only a few features are present: LIME attributes a small weight to those samples because they are far from the datapoint being investigated, while Kernel SHAP attributes a large weight to it because it isolates the individual behavior of features.

Note that the weights for $\left|z^\prime\right|=0$ and $\left|z^\prime\right|=p$ are not represented because they are infinite! Those infinities ensure missingness ($z_i = 0 \Longrightarrow \phi_i = 0$, so $\phi_0 = f(\emptyset)$) and local accuracy ($\sum_i \phi_i = f(x)$) respectively. In practice, "[...] these infinite weights can be avoided during optimization by analytically eliminating two variables using these constraints." (the constraints being the missingness and local accuracy equations).

In the following of this post I'll simply reproduce the computation SHAP attributions step-by-step on toy examples, starting with the one-dimensional case and moving on to the two-dimensional one.

The one-dimensional case is trivial: as mentioned above the infinite weights for coalitions involving no features or all of them impose two constraints:

With two features we actually have to sample data points to estimate Shapley values with Kernel SHAP. As before the reference Shapley value $\phi_0$ is given by the average of the model over the dataset, and the infinite sample weight for the features coalition involving all features ($\pi_{x}^{\mathrm{SHAP}}\left(p\right)=\infty$) imposes the constraint mentioned above: $\phi_0 + \phi_1 + \phi_2 = f(x)$.

Here I fit a small neural network since a linear model would of course not be able to reproduce the decision boundaries of our disk dataset. Note that an SVM would have been the best choice (or a linear model on smartly transformed features, e.g. $x_1 \rightarrow x_1^2+x_2^2$).

and is equivalent to assuming that the impact of adding a variable to a coalition is always the same not matter what is the initial coalition.

This assumption greatly simplifies the problem because it gives a recipe for the computation of the model prediction with missing values. In our 2-dimensional problem we simply have to compute the average prediction of the model with one fixed and the other one varying over the samples, and do the same for the other variable:

Going back to SHAP sample figure, the first value is the average of the model prediction over the vertical line, and the second value is the same average over the horizontal line.

In our 2-dimensional example, we're simply trying to find $\phi_1$ and $\phi_2$ such that we minimize the fidelity function

i.e. a one-dimensional linear regression with two-samples! Piece of 🎂.

The interpretation of those results is the following:

Note that fitting $\phi_2$ instead of $\phi_1$ gives similar results, as expected.